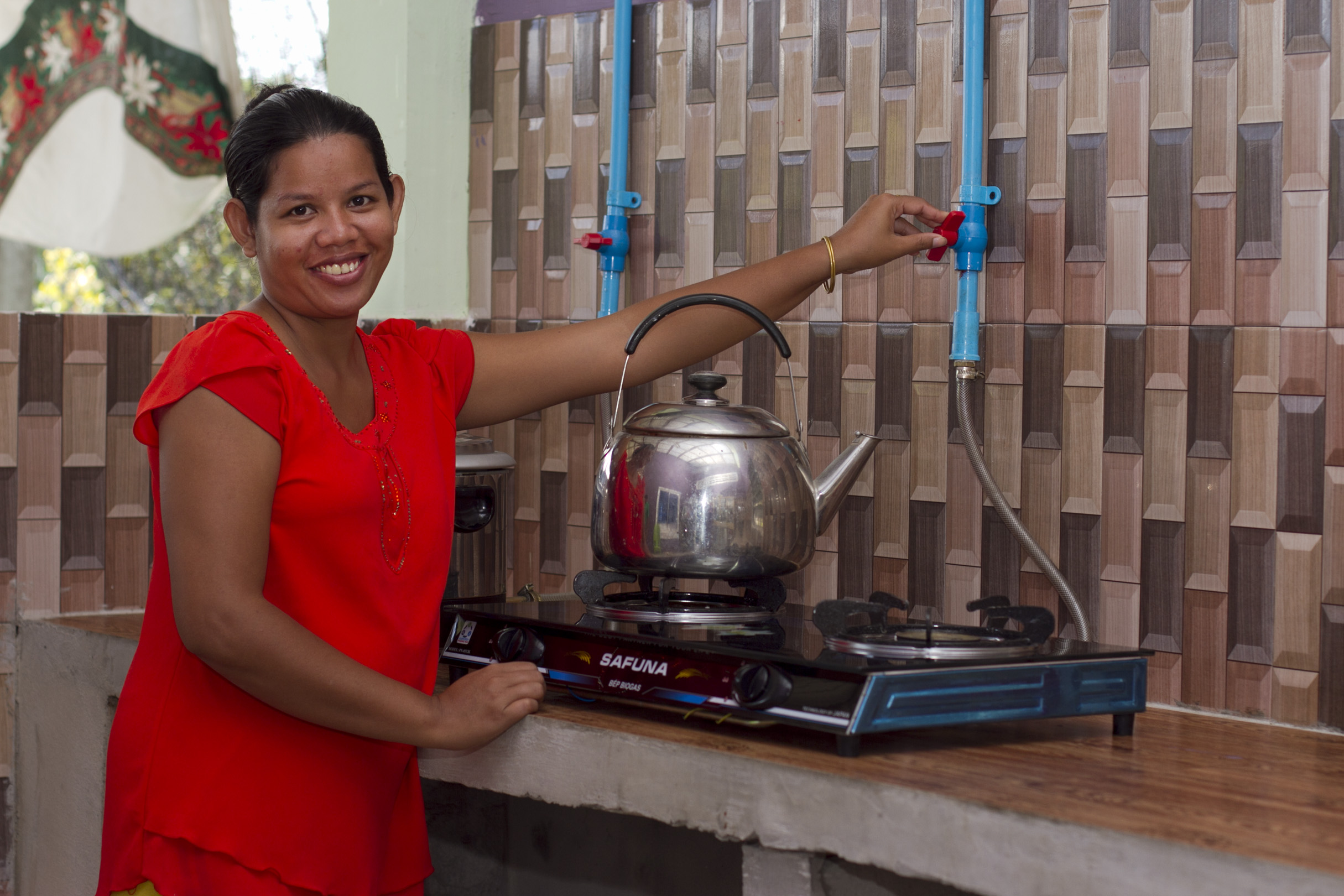 ATEC* Biodigesters International (ATEC) is a Cambodia-based social enterprise that provides high-quality, prefabricated biodigesters to rural households. ATEC’s biogas digesters can be installed in high groundwater and flood-prone areas. They are made with a type of UV-treated hard plastic called LLDPE which has a 25-year lifespan. ATEC ensures factory-controlled quality assurance, and the biodigester unit is easily installed on site where it collects, treats and converts farm waste (animal manure and green waste) into clean gas and organic fertilizer. ATEC’s biodigester is delivered with a modern biogas twin cookstove and a biogas rice cooker.

For a typical rural farming family with 2-3 livestock, a single ATEC biodigester system can provide enough gas to meet all daily cooking needs (3 bottles of gas per day) and produce 20 tons of high-quality organic fertilizer per year. The units help farmers save up to $521 per year on gas and fertilizer while reducing their dependence on firewood and preventing deforestation. In addition, ATEC’s biodigesters create a smoke-free cooking environment, producing considerable positive impact on respiratory health and safety.

The Private Financing Advisory Network (PFAN) supported ATEC throughout its participation at the 7th Asian Forum for Clean Energy Financing (AFCEF-7) business plan competition in Singapore in 2017. PFAN helped ATEC refine its business plan, its financial projections and investor pitch, and with the help of the PFAN network, ATEC mobilized $700,000 in equity. The investment was made by a consortium of investors, led by Small Giants (Australia) and consisting of Fondation Ensemble (France), ENGIE Rassembleurs d’Energies (France) and one other private Australian investor. In addition to winning a prize as second runner-up at the AFCEF-7 event in 2017, ATEC also was Global Winner of the Vienna Investor Forum later the same year.

ATEC recently raised an additional $1.6 million in a Series B equity round to roll out its payment scheme for biodigesters —PAYGO, or Pay-As-You-Go— as well as to expand its operations from Cambodia to Bangladesh. The funding was channeled through by a consortium of investors led by ENGIE Rassembleurs d’Energies, Fondation Ensemble, the Impact Investment Exchange Growth Fund and Phitrust Asia.

ATEC’s PAYGO biogas scheme allows farmers to make monthly payments via a mobile phone application called Wing Money. With this new financing model and the new round of funding, ATEC expects to bring clean and affordable fuel to 7,500 households in Asia, helping them generate $770 more net income per year while reducing indoor air pollution, saving up 20 hours per week per household, and particularly women, from cooking and firewood collection.

“ATEC is the first globally to integrate PAYGO with biodigesters, meaning they’re finally affordable for almost every family in rural developing communities,” said Ben Jeffreys, ATEC’s CEO. “Working in partnership with our international debt providers, thousands of families will now have affordable access to clean energy and a healthier lifestyle.”

“It is because of companies such as ATEC that I joined PFAN”, said Cecile Dahome, PFAN Country Coordinator and Consultant of ATEC. You know that when you support them in their fundraising you are indirectly generating impact for the base of the pyramid”.

This website uses cookies to improve your experience while you navigate through the website. Out of these cookies, the cookies that are categorized as necessary are stored on your browser as they are essential for the working of basic functionalities of the website. We also use third-party cookies that help us analyze and understand how you use this website. These cookies will be stored in your browser only with your consent. You also have the option to opt-out of these cookies. But opting out of some of these cookies may have an effect on your browsing experience.
Necessary Always Enabled
Necessary cookies are absolutely essential for the website to function properly. This category only includes cookies that ensures basic functionalities and security features of the website. These cookies do not store any personal information.
Analytics
Any cookies that may not be particularly necessary for the website to function and is used specifically to collect user personal data via analytics, ads, other embedded contents are termed as non-necessary cookies. It is mandatory to procure user consent prior to running these cookies on your website.
Save & Accept